My League Of Legends Thread 119 views

. in MARATHONBET we have a really solid course. The average is about 2.6 and here's almost 3. It's a viable risk for me. Ok all of us know from the beginning that 04 is the main favorite of this tournament. No one is hiding from it. The team openly confesses and announces it to everyone and because they put a lot of emphasis on winning the EU masters. This team has already proved many times that it can win against the best, such as G2. However, it can also play completely below expectations and fail with very weak rivals. Movistar is a team from the heavy Spanish league which is not weak and which will have great motivation to show its best side against 04. The Germans will feel a lot of pressure today because I think subconsciously they know that this will not be an easy duel. Movistar has 23 wins, practically the same percentage of wins (about 70%) and is in big swing. A very solid selection of well-played characters on honey (32% of the total insults) the case that Shalke may have a problem already at the draft stage. The last game against Team Singularity confirmed the good disposition of Xiko and Elyoya, of course, leaving aside the fact that TS surprised me negatively this year. Im also betting this on esporttalk


JD GAMING will be playing in a composition today: Loken, LvMao, Zoom, Kanavi, Yagao. On the opposite team we will see JackeyLove, QiuQiu (oddly for some people instead of Yuyanjia) 369, Karsa, Knight. So, today we will see QiuQiu in action - not sure if it's good for them. I deliberately do not choose to win the JDG, but I think the odds are well balanced. But playing for 1.6 is not worth the price of favorites to me. I was interested in betting on a number below 26.5 killings during this final. Although the average of these teams is a little bit higher, let's not forget that it has changed a little bit with the stages of the season and this average is a little bit inadequate. Secondly, the finalls are always played much more carefully and we'll wait for a big one too (line 23,5 about 2,6 in odds). The JingDong is one of the better first blood chemistry in the league and that's why the ratio for such an event is now profitable. Interestingly, one team has a shorter game in the league (Top Esports vs Team WE (22 minutes) and the second longest JD Gaming vs FPX (almost 42 minutes). The strength distribution looks more or less similar and proportional with the difference of a slightly more aggressive jungler on the Top Esports side. In fact, depending on the first map I will be analyzing if the line for killings is profitable so this bet is on 1 map and not on the next. bet source 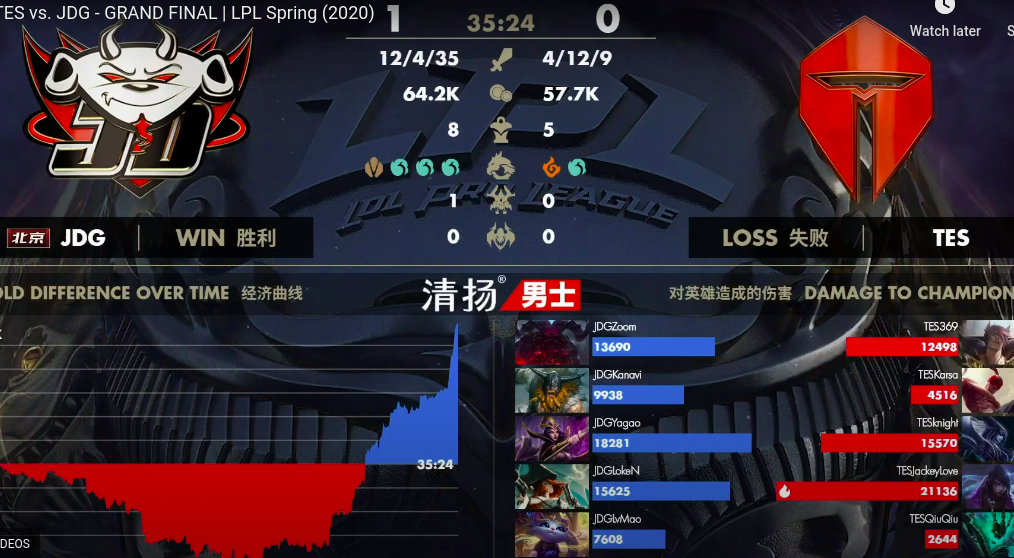 Both teams have over 70% of the winnings. Giant Gaming has played more matches making the statistics more reliable. VODAFONE GIANTS mainly concentrates around their Mid and AD carry while the LDLC has an equal distribution of players. And today that can be their advantage because when comparing their favourite champions they have more room for manoeuvre in the drafts and that can give a big advantage. And here again there is a place for analysts to play live - if you know your way around the current finish line you can see and make a lot of money. In the VGIA big unknown is Th3Antonio, although he played very well in both previous matches with LDLC. Although Vatheo has quite a low KDA, maybe that's why there's more room in LDLC where jungler and ADC stand out instead. At this stage it's much harder to predict the result so I wouldn't risk it with a stake however, the LDLC should have a balanced fight.

Odds on LDLC that I've been seenrecently are behaving quite strangely. Initially put in the role of a favorite, but now less considered by the general public. The courses have gone up a bit too much in my opinion. The initial offer was 1.6 and after a few hours the odds even reached the limit of 1.9 and now basically the odds of bookmakers are rated as 50/50. In fact, having such amounts of data and comparisons it's hard to argue here whether it's right or wrong. I only judge the game and rivals of both teams. And here, in my opinion, LDLC had a harder crossing. The LDLC has an easier task today in draft. Their main role today is to limit the very dangerous ADC carry, which inflicts almost 1/3 of the total damage in the Excel team, and recently the match with RGO showed that they can choose the right heroes. Excel actually won against Gamer Legion and YDN, who were put up before the tournament as one of the ones to fight but their matches against Excel were one-sided. The LDLC is in good gas has a lot more matches played and they certainly feel their power. One risk is that they play over-relaxed. Both teams have passe winners but LDLC should have a mental advantage here.

bet and prediction from https://esporttalk.org/ : AGO @ 1.8 Unibet

It is hard to find a really profitable course here. We already have a lot of statistics and matches behind us. In many of the matches the form of the day was simply decided and basically this is where you can finish the analysis. AGO player - Szygenda is in 1 of the top five KDA players - most played: Aatrox and Renekton. The second good player in the best five of this team is Chocolate which is in the lead with KDA at 7.5 and 420 gold per minute. Syndra and Azir play most often. It will certainly depend a lot on their form today and we think they can do it. The opponent has limited room for manoeuvre in the banes and each of their favourite champs is very versatile. In last 2019 season Polish formations were strong but they didn't stand the pressure and made very stupid mistakes. The level of this league, however, does not differ as far as the allocated places in the line-up indicate. Today this pressure will also be there, but as you can see from the previous matches, the level of the league is good. Of course, the higher the stakes, the more nerves will grow. I think that the players from Poland are better than LDLC, who also surprised me positively this year. The French organization that is in the gas will undoubtedly be a very good rival today.

When we look at the breath games of the teams in recent times, they ended up with a relatively small number of kills below average. They played 5 games in total. Both clashes were lost by T1 and there were relatively few killings in the whole match. This is not a small psychological advantage today. In a static clash - a result 2:0 and a definite advantage in kills (27 vs 13) - In February there were 3 matches, again 2 maps won by DWG. What's interesting is that more killers for all 3 maps had T1 but they still lost. This shows a bit chaotic approach of T1 to the season. Of course this team looks much better now but Damwon is an uncomfortable rival for the T1 and they like to make the game more difficult for the Korean stars. The T1 is the favorite to leave the group, but DAMWON GAMING will have a hard time getting through, especially if they block out the uncomfortable le blanc on mid.

Today Gen G is the team that has the shane to get out of second MID cup group. They are not a favorite, but they are very unpredictable and they like to play hard, which can be hard for the Koreans. DragonX is much less flexible and I think Gen G will have an advantage here already at the draft stage. It promises to be an interesting match on the bot - Deft vs Ruler (best adc at this moment ever) but it's the mid Bdd vs. Chovy who should have the advantage with a bigger pool of champions he plays better. In the pinnacle we have very even odds because as much as 1.85 on Gen G where many bookmakers have already reduced the co-incident to 1.65 - 1.7.
1
New Thread
Reply

Get unlimited access to every pick made by every non-business member. Just $349/mo.

Start Winning Now 100% Money-Back Guarantee
No thanks. I like losing.

Yes, Sign me up now No, show me the handicappers first
modal